Collection of gnomes and an interview with my mother Gerd Ihrman

Ingela Ihrman: Each year you devote yourself to a pretty ambitious craft at home, making small gnomes from dried plants, wool and other natural materials. You send them as Christmas greetings to friends and family around Sweden. I received the gnome of 2019 and I think it is great, almost as good as the banana peel version from 2009. Can you describe how you made it?

Gerd Ihrman: This year I used the color orange as a starting point. The hats are made from dried citrus peel – a squeezed half lemon or clementine peel twisted to a cone. The heads are unripe yellowish pine cones that woodpeckers have eaten the seeds from. Two cherry-stones are glued to the pine cones for eyes. The lines on the stones make it look like they are squinting or have their eyes closed. The beards are made of goat hair that I got from a neighbor three years ago. It fits well color wise. The noses are small pieces of dried carrot.

I: How come you started with the gnomes?

G: It was because I want to send people greetings at Christmas, but I really dislike those pre-printed cards you just write your name on. Also, I find the red and white Santa too commercial and artificial. I’d rather imagine creatures in brown or grey, bearded and with a top hat, that might live in the woods, even though I don’t believe they exist for real.

I: For how many years have you made gnomes?

G: I have been making them for more than ten years now. Before that, I made other personal cards – cutting out reindeer, angels, Christmas trees and stars from painted sheets of paper and glued them on cardboard. This year I made 41 gnomes, in the beginning they were 25 or so. It adds on, and I find it hard to stop sending to people who usually get them.

I: The gnomes are made from natural materials, used textiles or something that otherwise would end up in the compost. Can you describe how you choose what to work with?

G: I use things I find in my surroundings, both outdoors and indoors. I almost never go shopping in stores, but I walk frequently in forests and other landscapes. Now that I’ve been making the gnomes for a while, the material hunt is in the back of my head all year, especially when I’m on my own in the countryside. I’m not constantly thinking about finding  materials to use, but when I see a certain shape or colour, I know.

I: Are there any materials you wouldn’t use?

G: I try not to use the same thing twice. It’s also good if it’s not too heavy, otherwise the postage gets expensive. And the gnome should not be thicker than 3 cm because then it costs extra for bulky. This year, all postage went to 1500 SEK, but your dad says I shouldn’t worry. During the fall I collect milk cartons and empty paper and toilet rolls and use them as packages.

I: What kind of feedback have you got from people who receive your gnomes?

G: At first, I didn’t get that much response. Maybe a greeting on a regular printed Christmas card with a forest motif or bullfinches. In the beginning, I was careful to make the gnomes ugly. Later, when I started to make them a little nicer, I also started to get responses. But it is important for me to keep them a bit unattractive. I want to move away from the knick-knack Christmas, it gets so superficial. Also, I’m not that cute myself. I find it more charming and genuine with something a bit worn in natural colors.

I: Is that because you want to see yourself in the gnomes?

G: Yes, maybe it’s got to do with that. One year I made an apple scrap gnome with a hat in red cloth, embroidered with white chain stitches and a white fluffy wool beard. Then people obviously got happy. For an early gnome I used dried yellow chanterelles. I myself liked that one a lot, but the chanterelles were crumbled in the mail so people probably didn’t appreciate it so much. And when I used black crowberry branches for the beards, all the little needles fell off in the package, leaving only the twigs. But I have grown more and more ambitious over time. I know some people are saving their gnomes and put them up every year for Christmas.

I: Are you only using found natural material?

G: Not really. Buying ready-made hobby stuff is not an option, that’s boring, but using the purple fabric from my daughter’s disused wool coat that I kept for 20 years, that is fun! I consider sheep wool ok, and crocheting hats from leftover yarn. I have used dried banana peel, apple kernels, cinnamon sticks, white peppercorns, blueberry branches, club moss, lentils and beans. One year I stole a dried, fluffy ornamental plant from a flowerbed I passed every day with the dog. Another year I used bread dough and baked the heads of the gnomes.

I: Are you happy with the bread gnomes?

I: They look alot like yourself, in my eyes.

G: That might be true. But I thought I got it together nicely – satisfying both the recipient’s need for sweet and beautiful and my own ambitions with the gnomes. I made the hat from knitted Lovikka yarn, embroidered with stitches. It was probably the hat everyone liked, not the dough face.

I: Do you create other things aside from the gnomes, apart from knitting socks and mittens, I mean, things that are not directly useful.

G: The gnomes are also useful for me, they function as a kind of Christmas card and I make them because I need things to send as greetings. I like to combine purpose and pleasure when I create – doing something fun that will also be nice and useful. Creating and only appreciating it for what it is, like a painting, is not for me. It doesn’t make me satisfied. 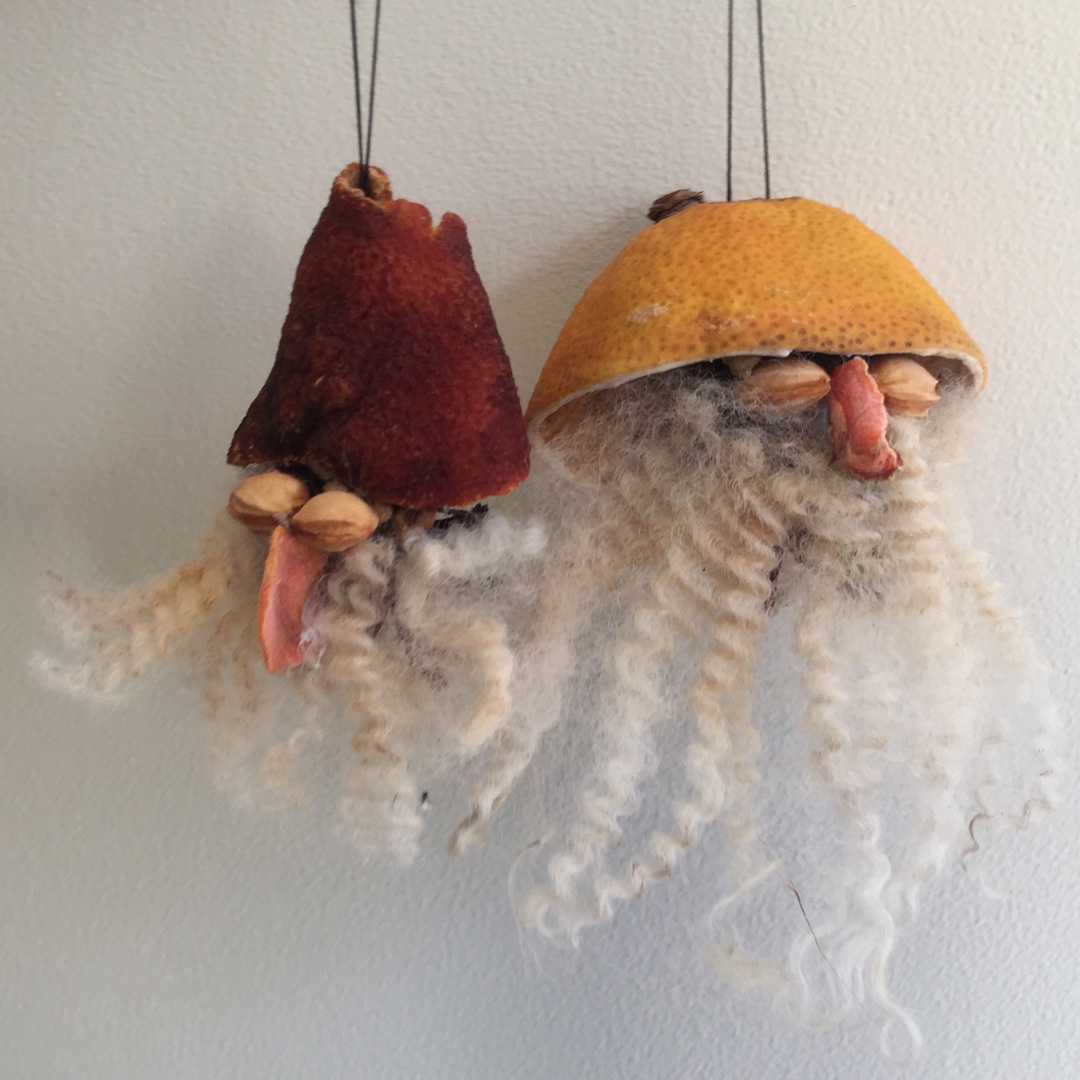 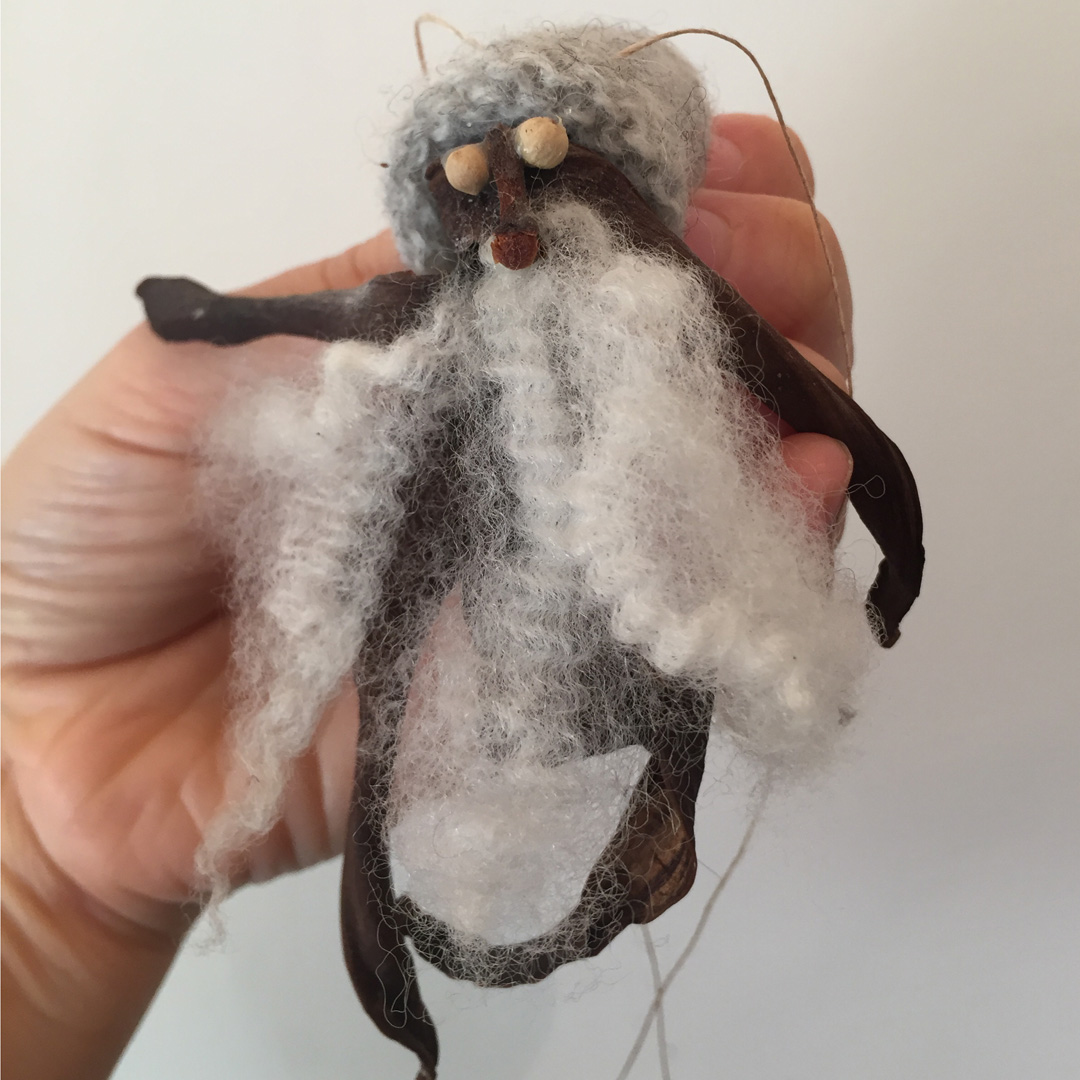 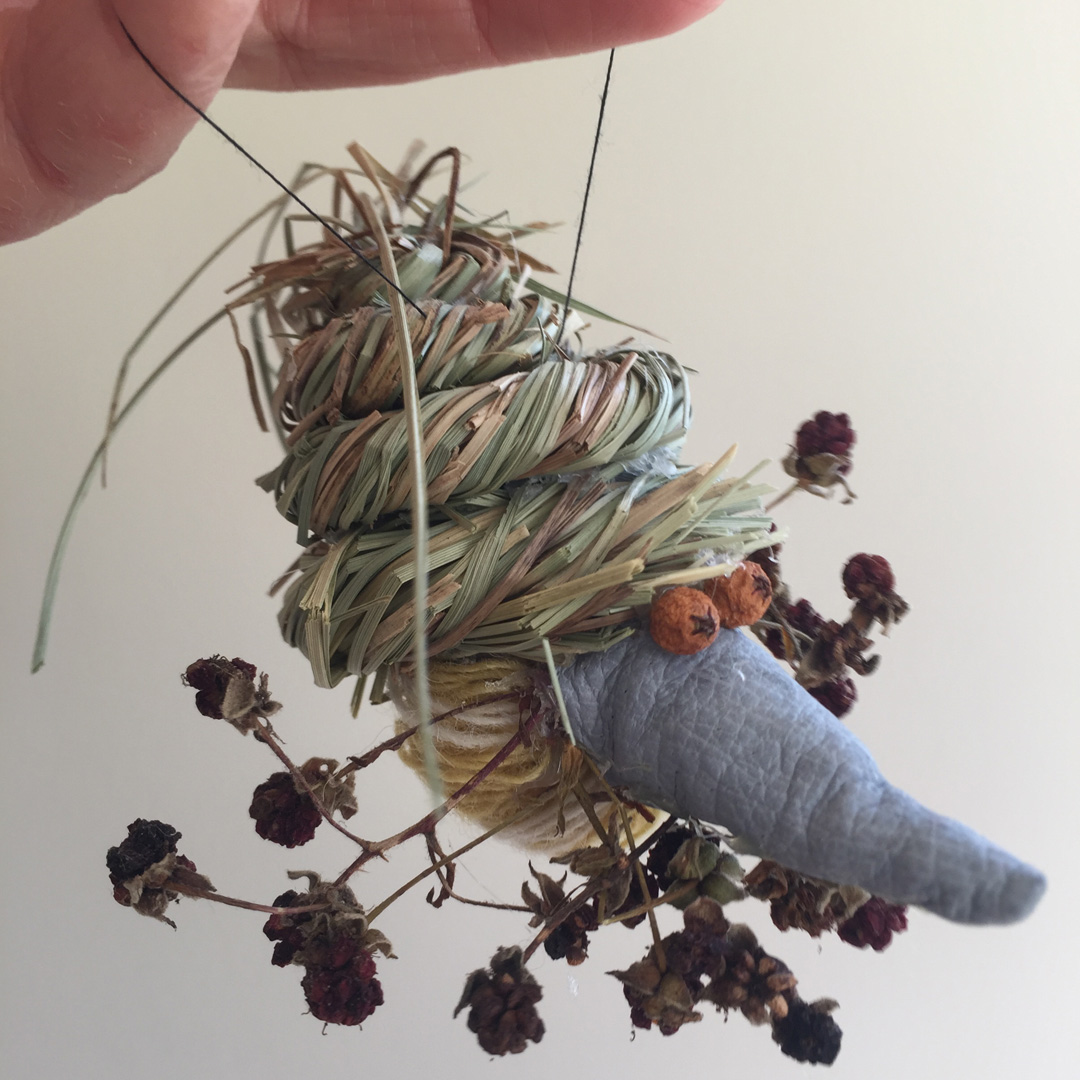 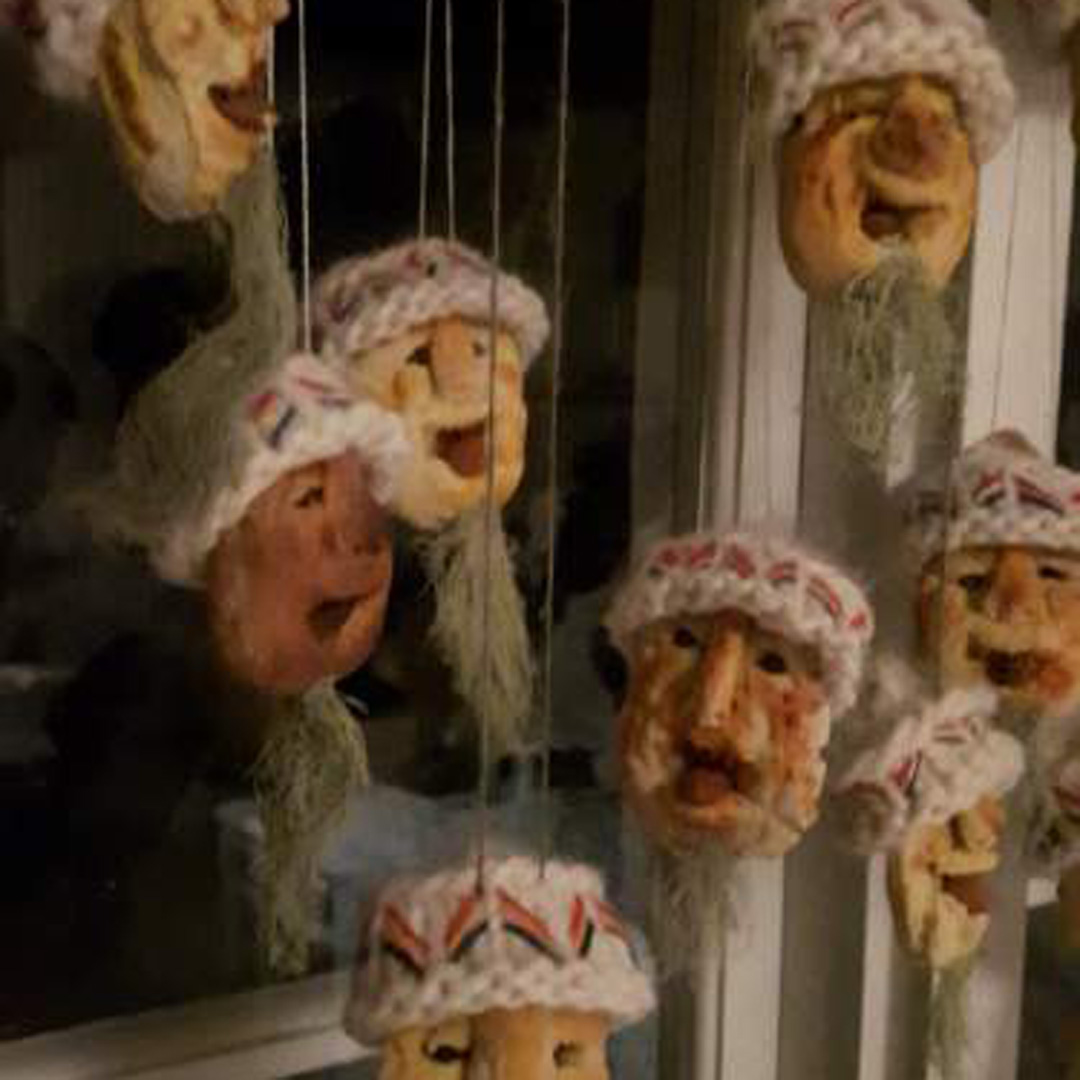 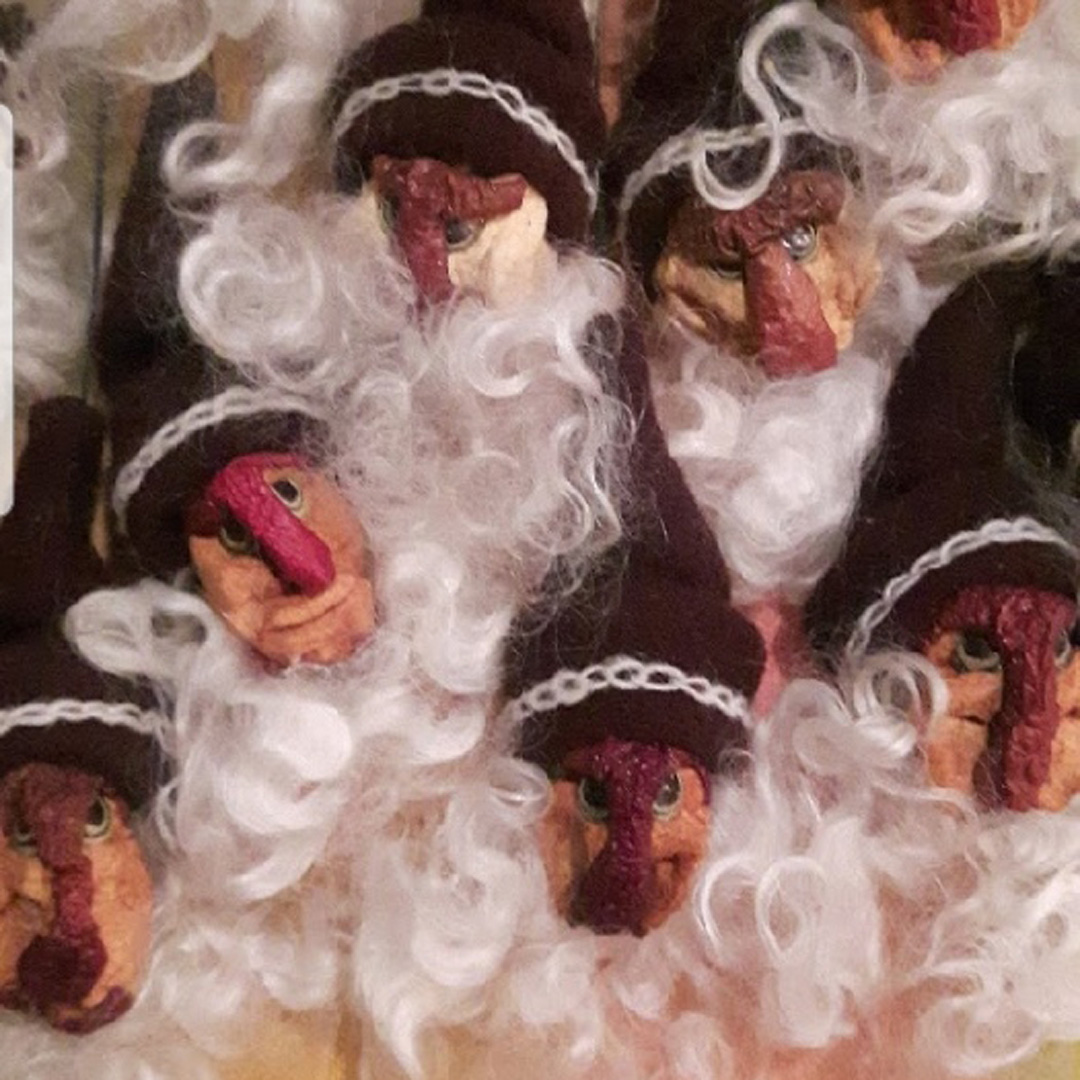 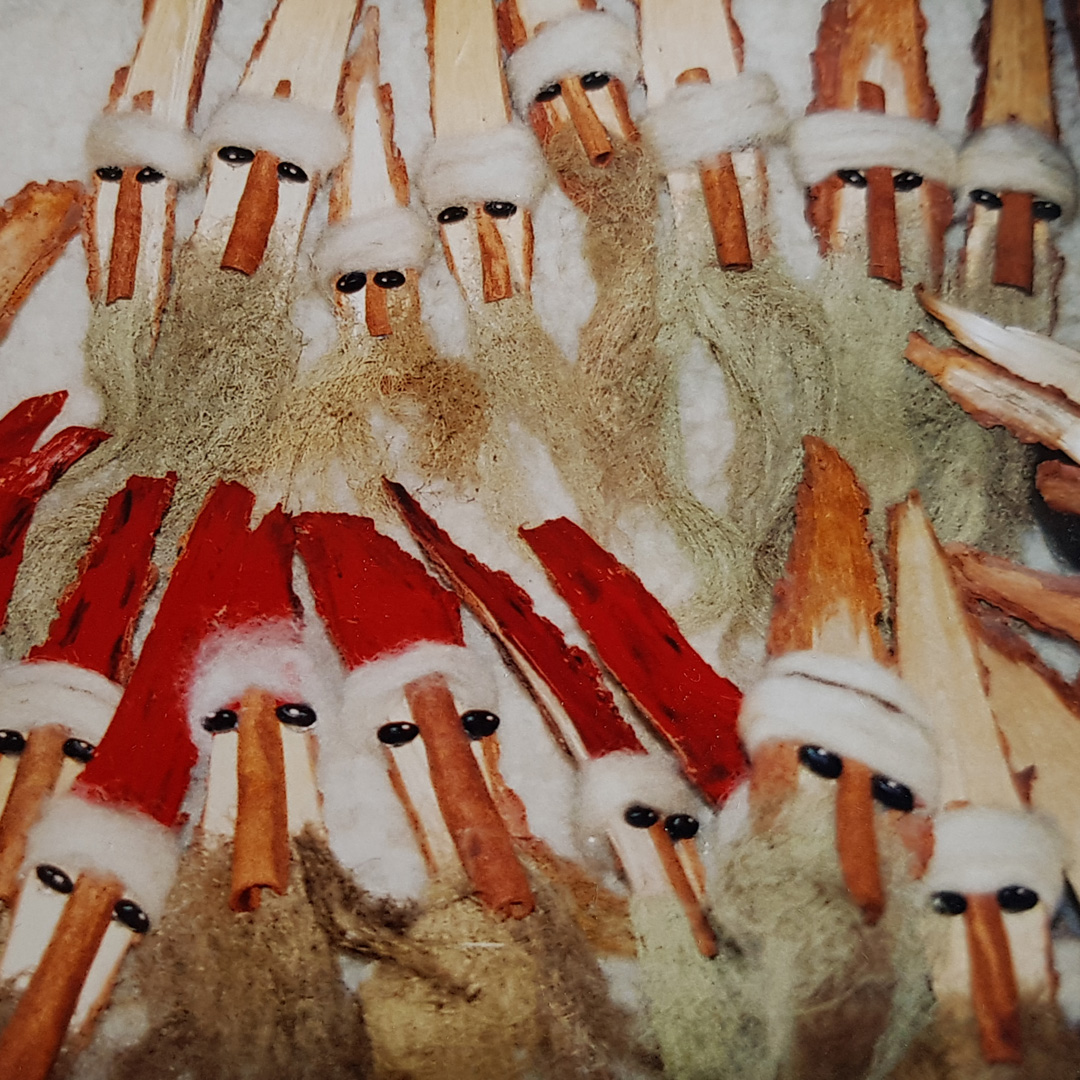 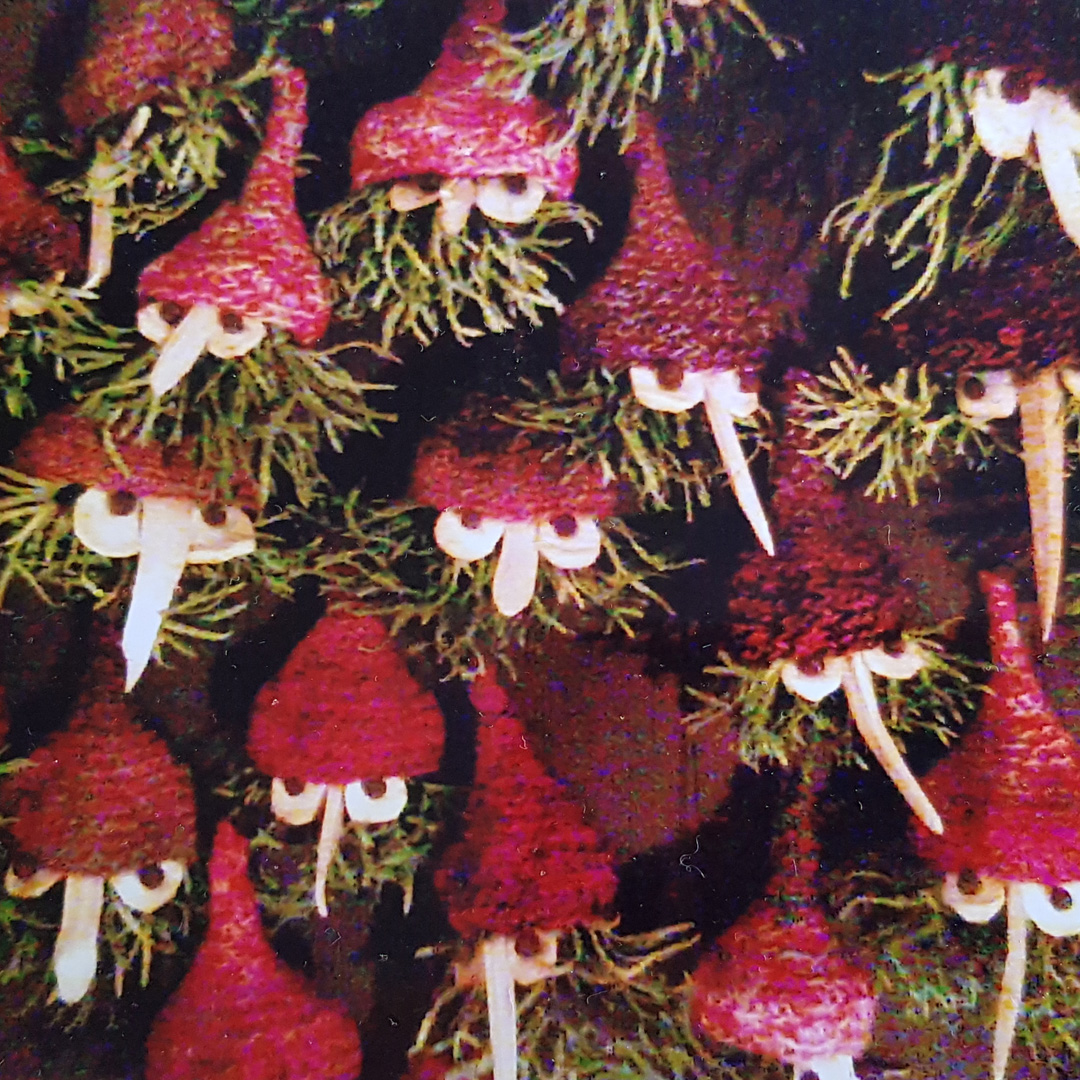